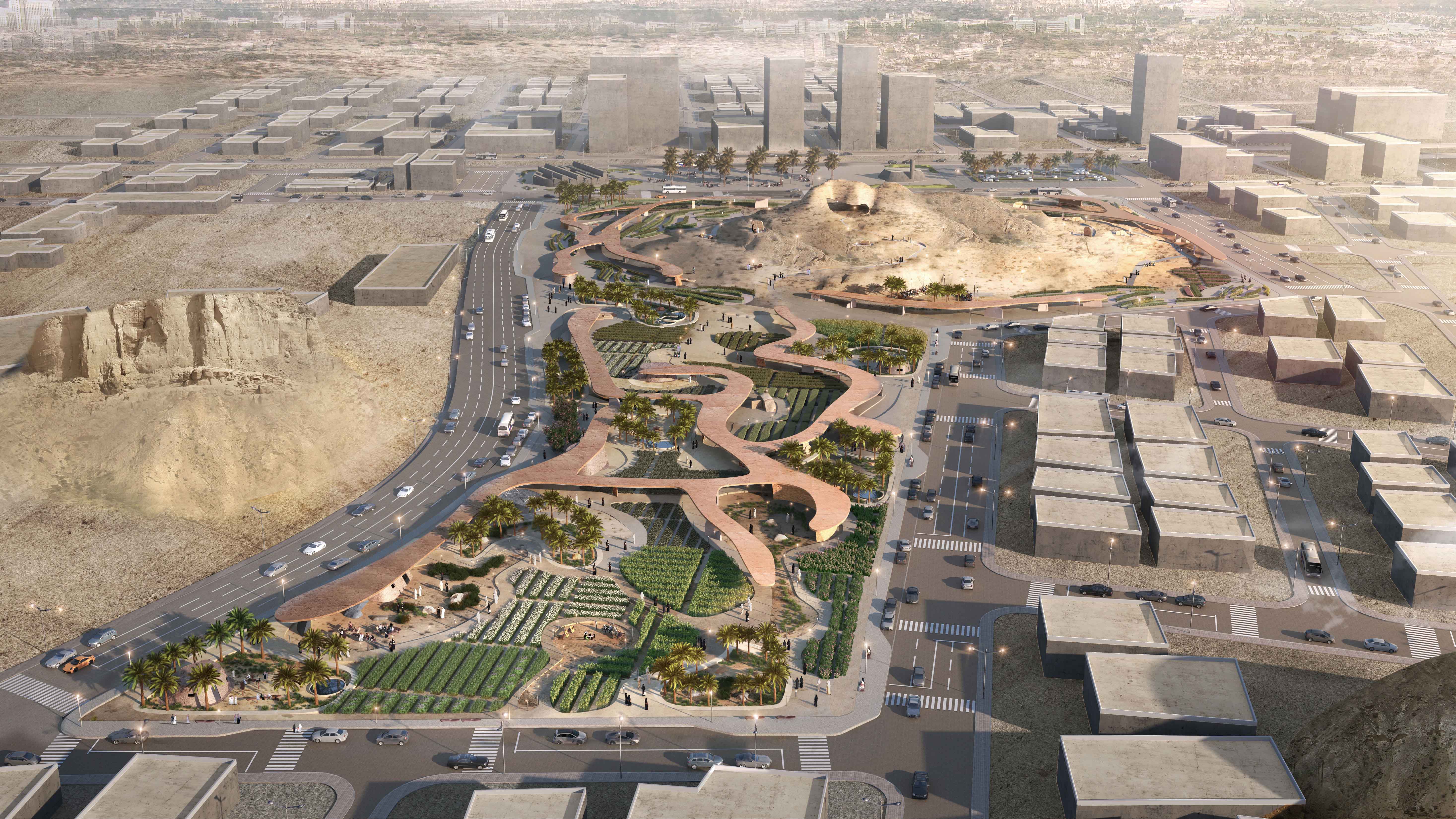 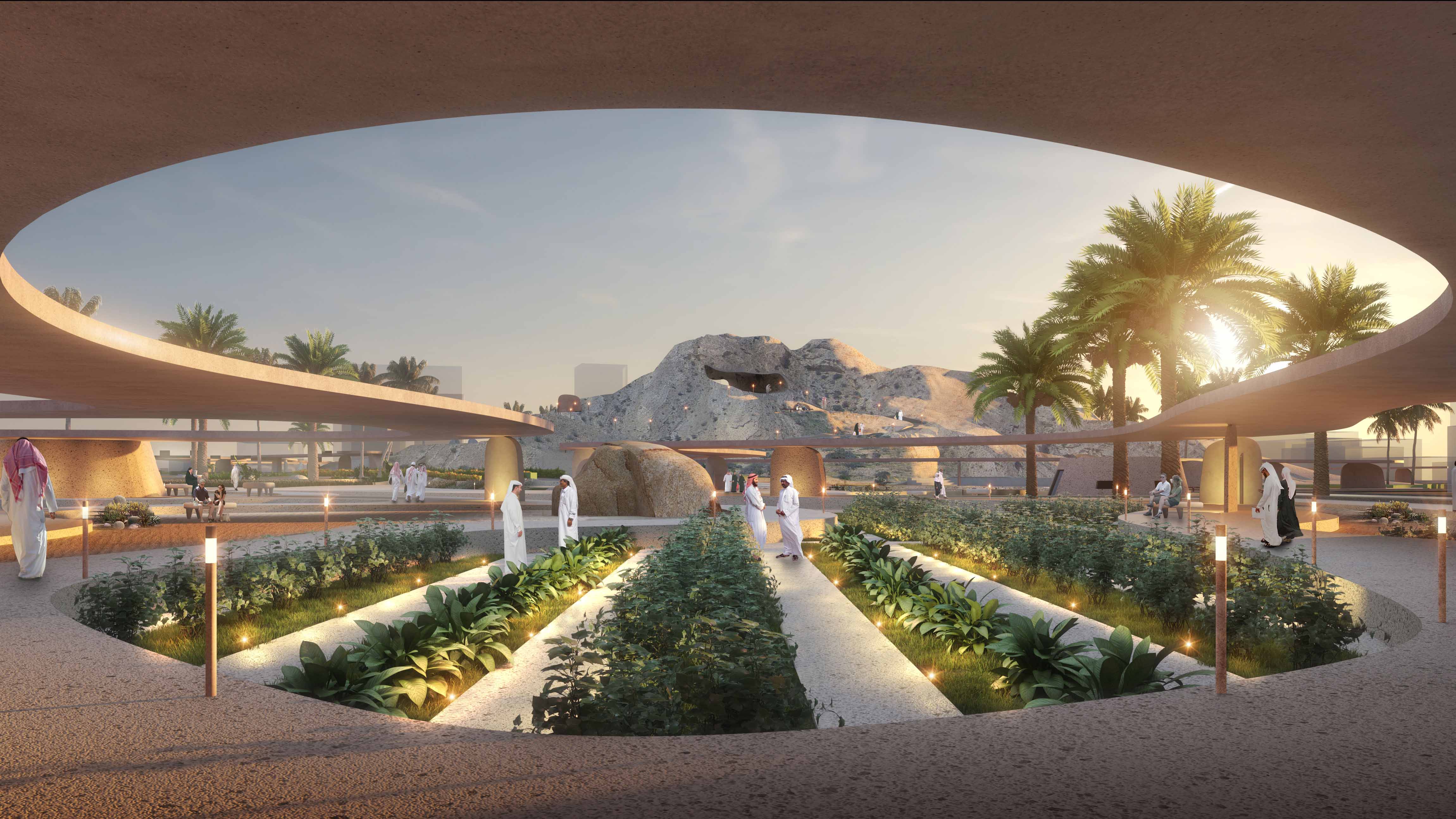 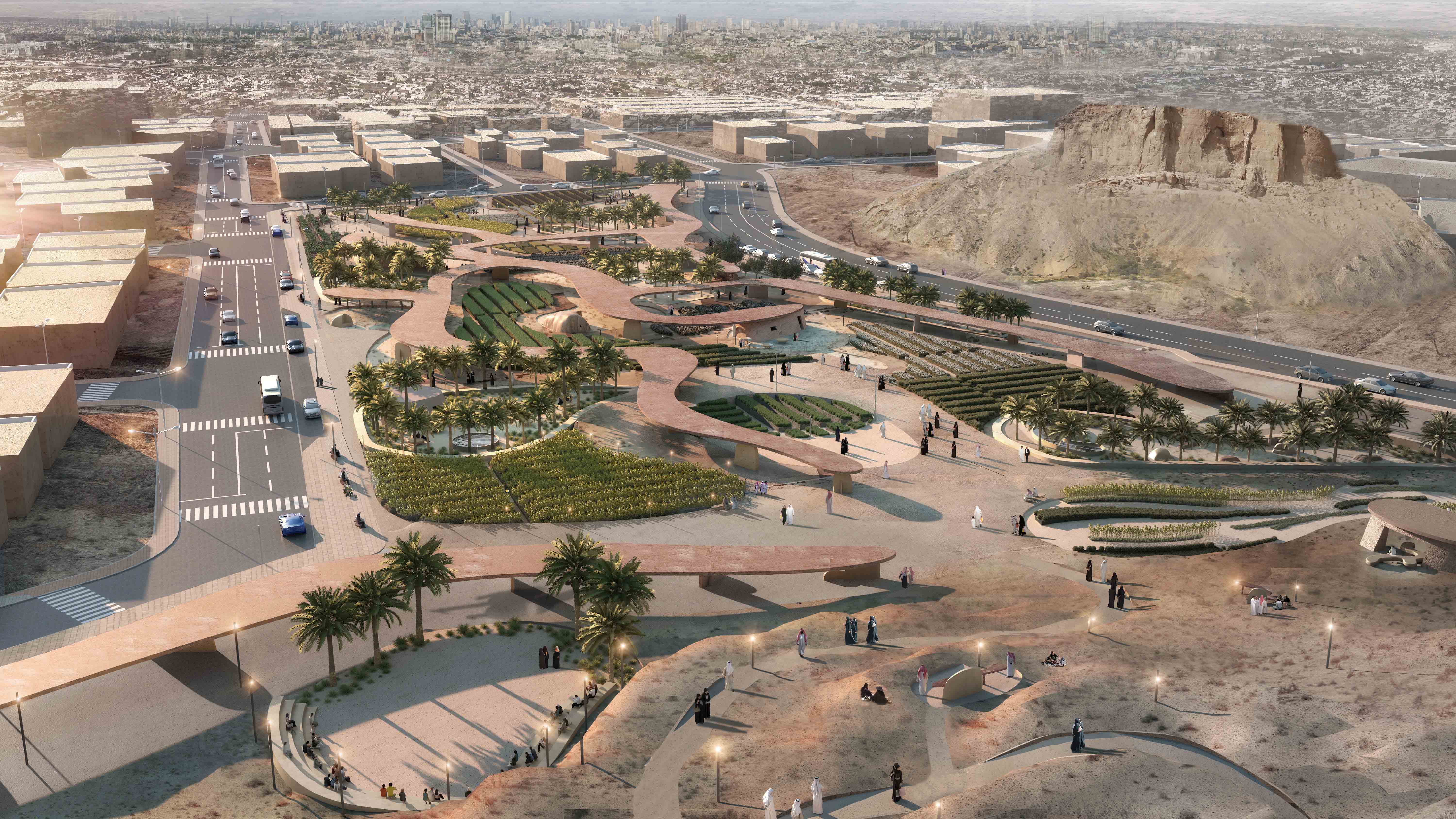 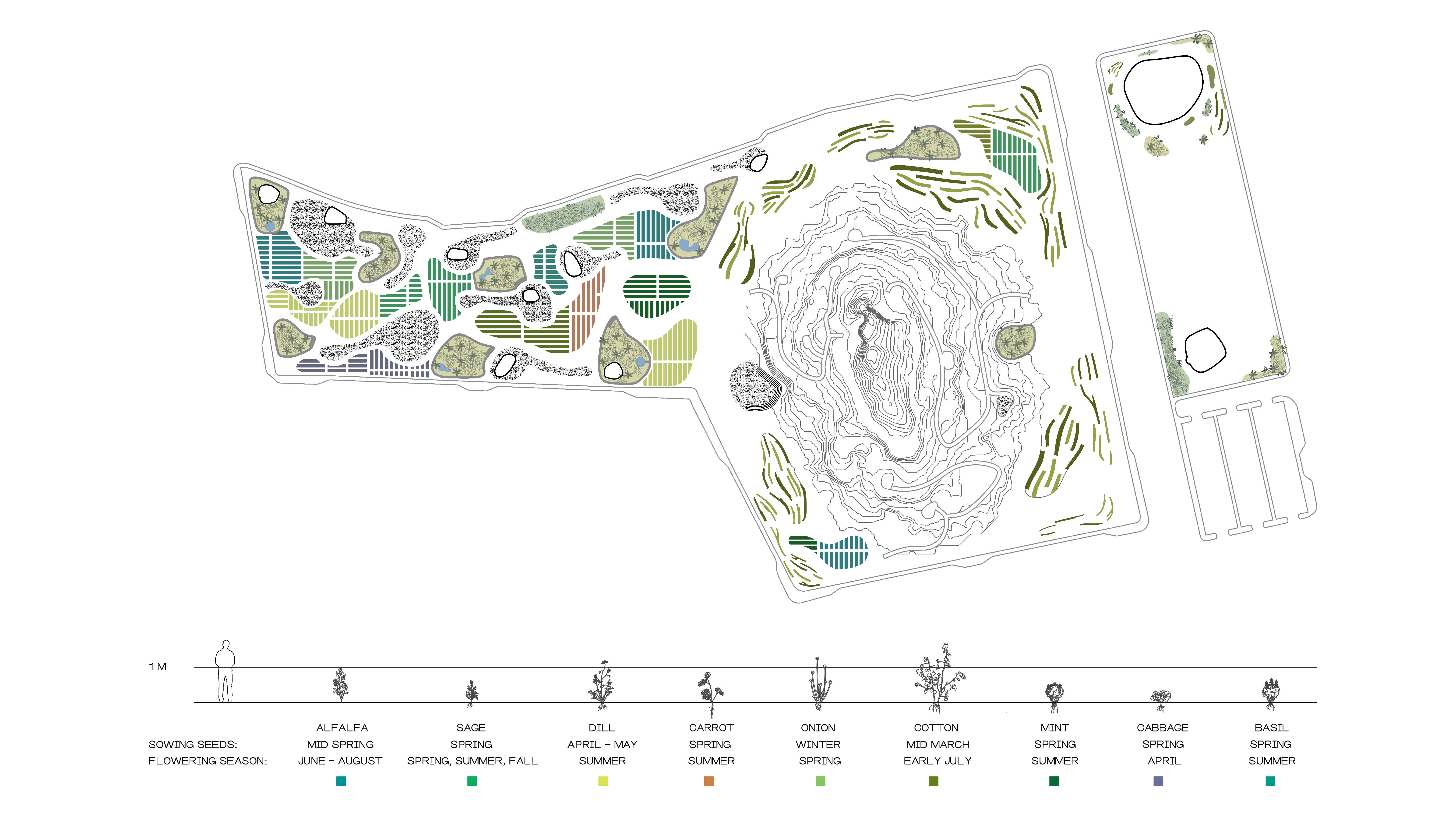 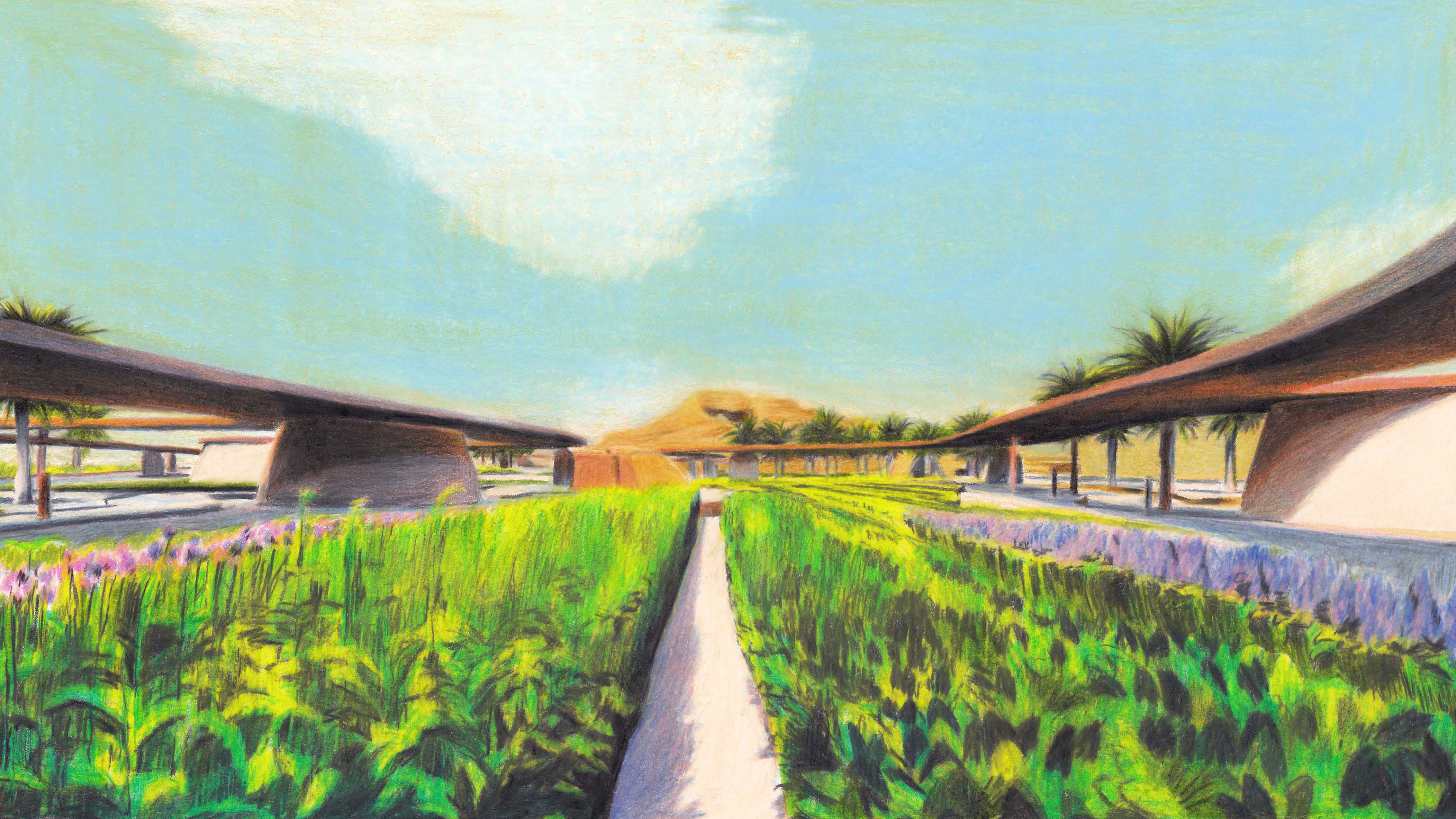 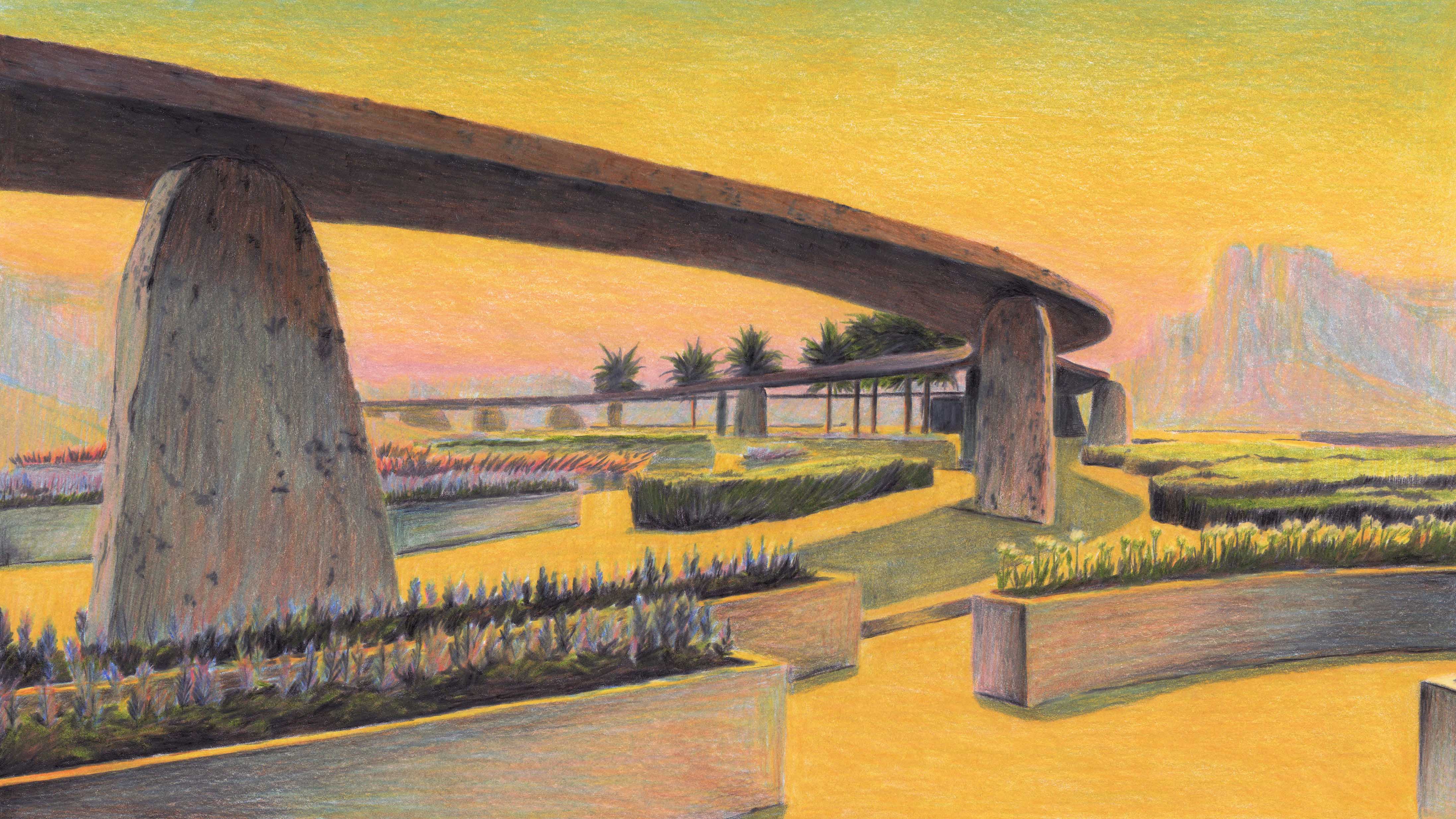 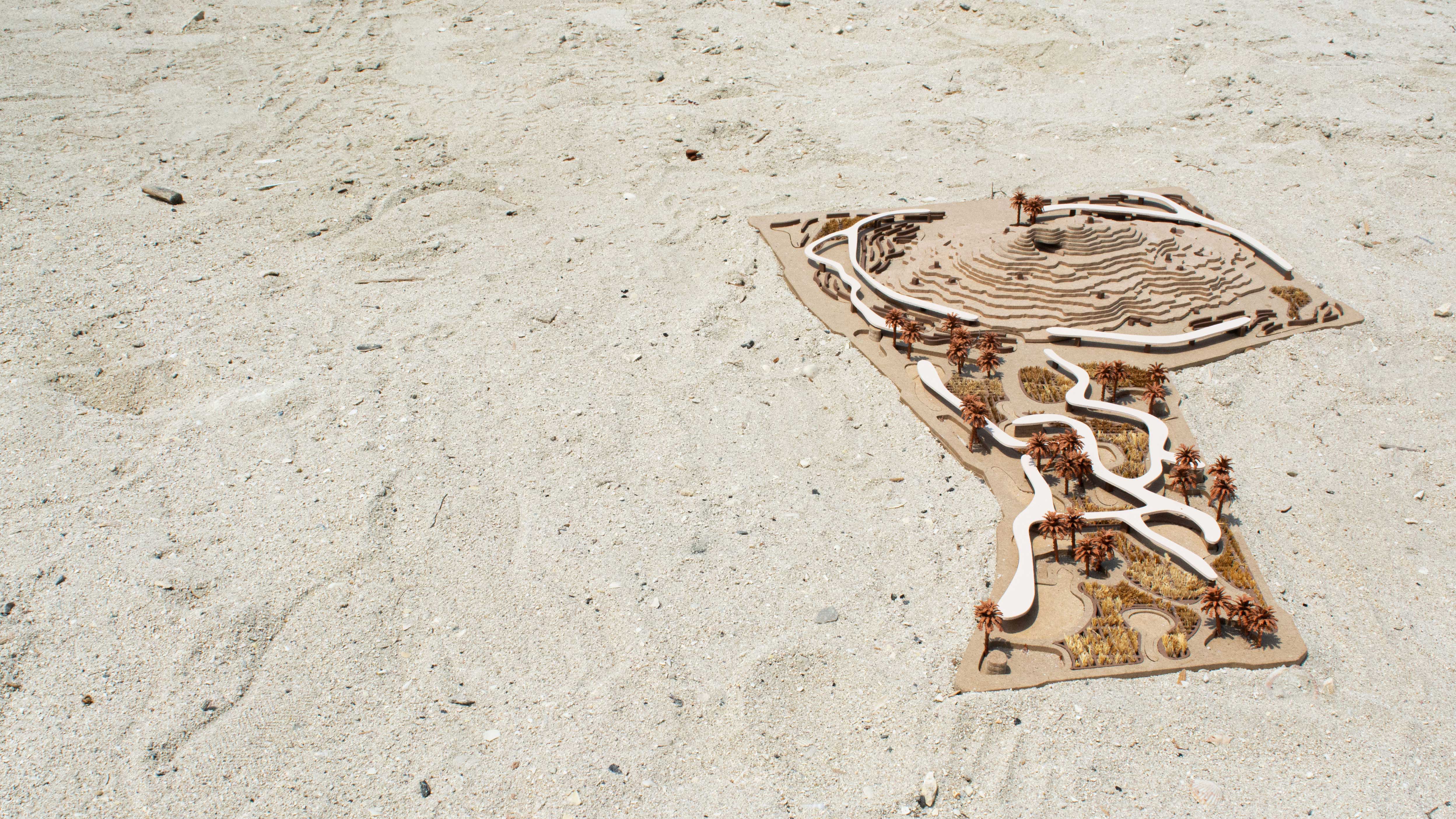 The proposal offers a two part strategy which takes advantage of Riyadh's history to explore a new direction for a public park. Rather than restoring the terraces to a green condition, we argue that what made Abu Makhrouq interesting was that it was an urban mountain, and that it offered an idea of leisure and rest that did not require greenery, simply the quiet and beauty that a mountain in the desert offers. The proposal maintains the outcrop’s unique presence as a public park that is a topographic feature.

The remainder of the site is turned into a contemporary reimagining of a farm, retaining the subdivisions and planting that would have been present at the beginning of the 20th century but taking on a new form. Rather than a European park, this strategy of mixing shading, produce, and reducing decorative planting poses a sustainable vision for how to preserve the historic idea of leisure in the Arabian Peninsula, and offer a new vision for public parks in the 21st century Arabic city. 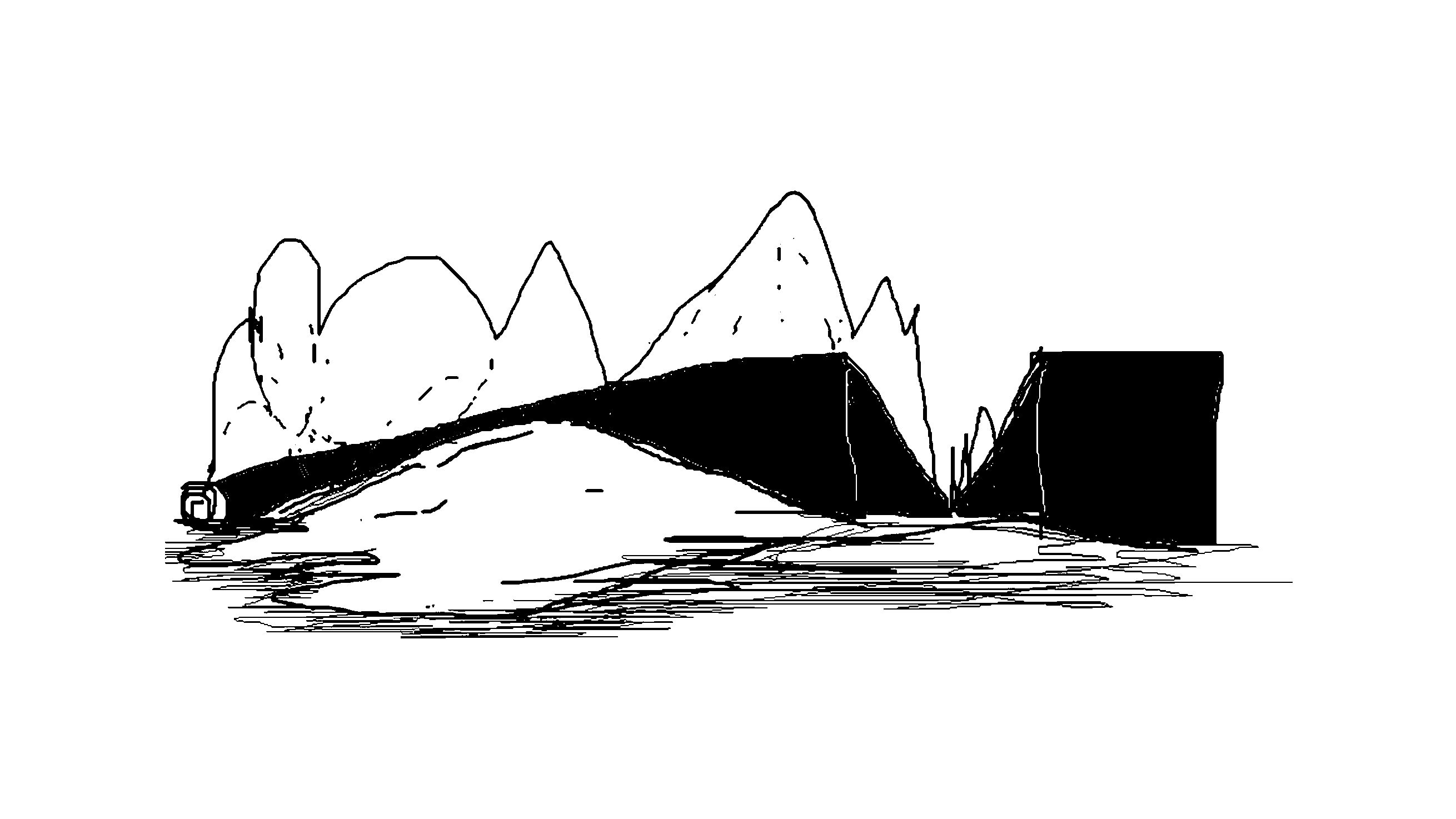 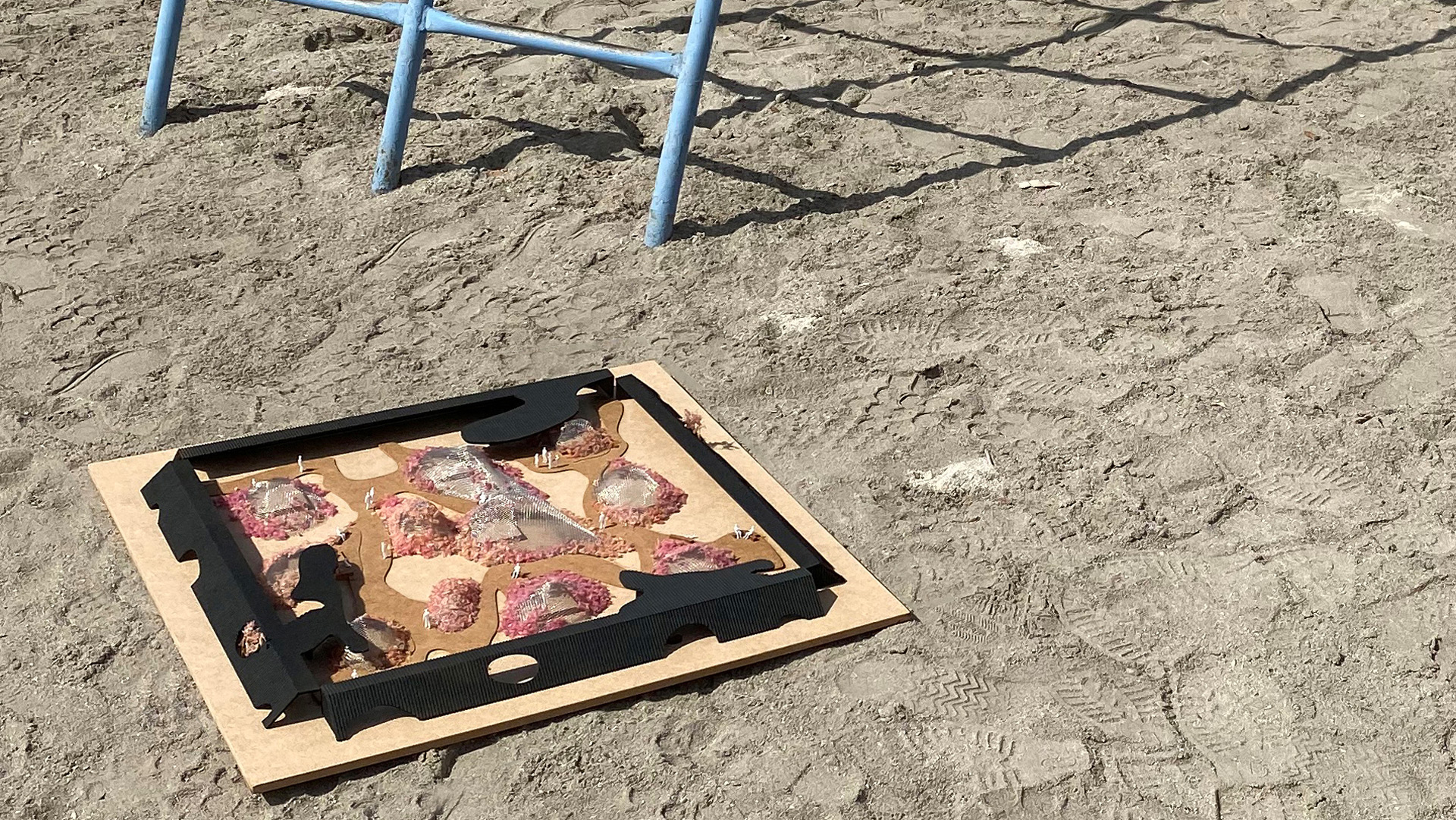 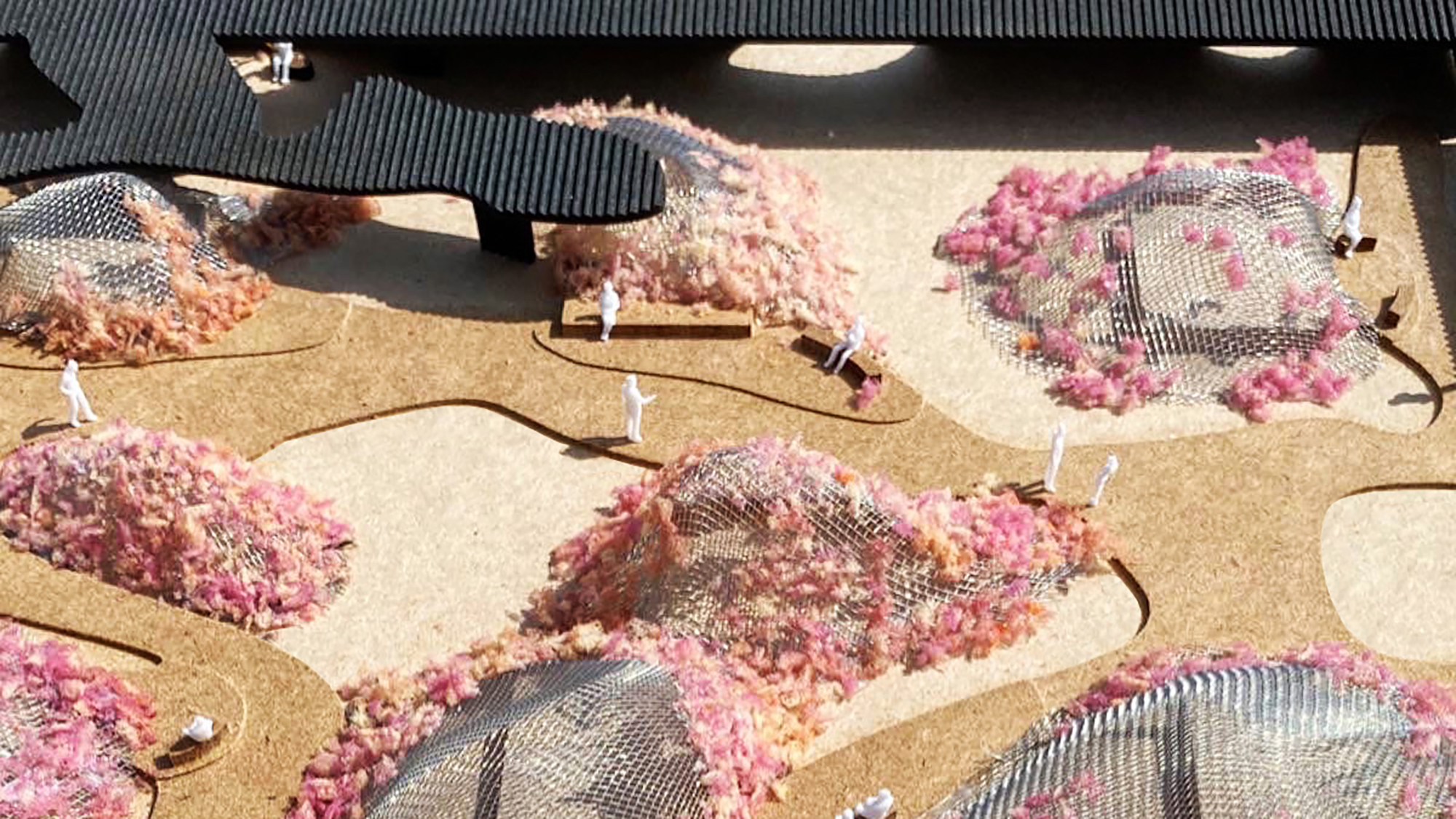 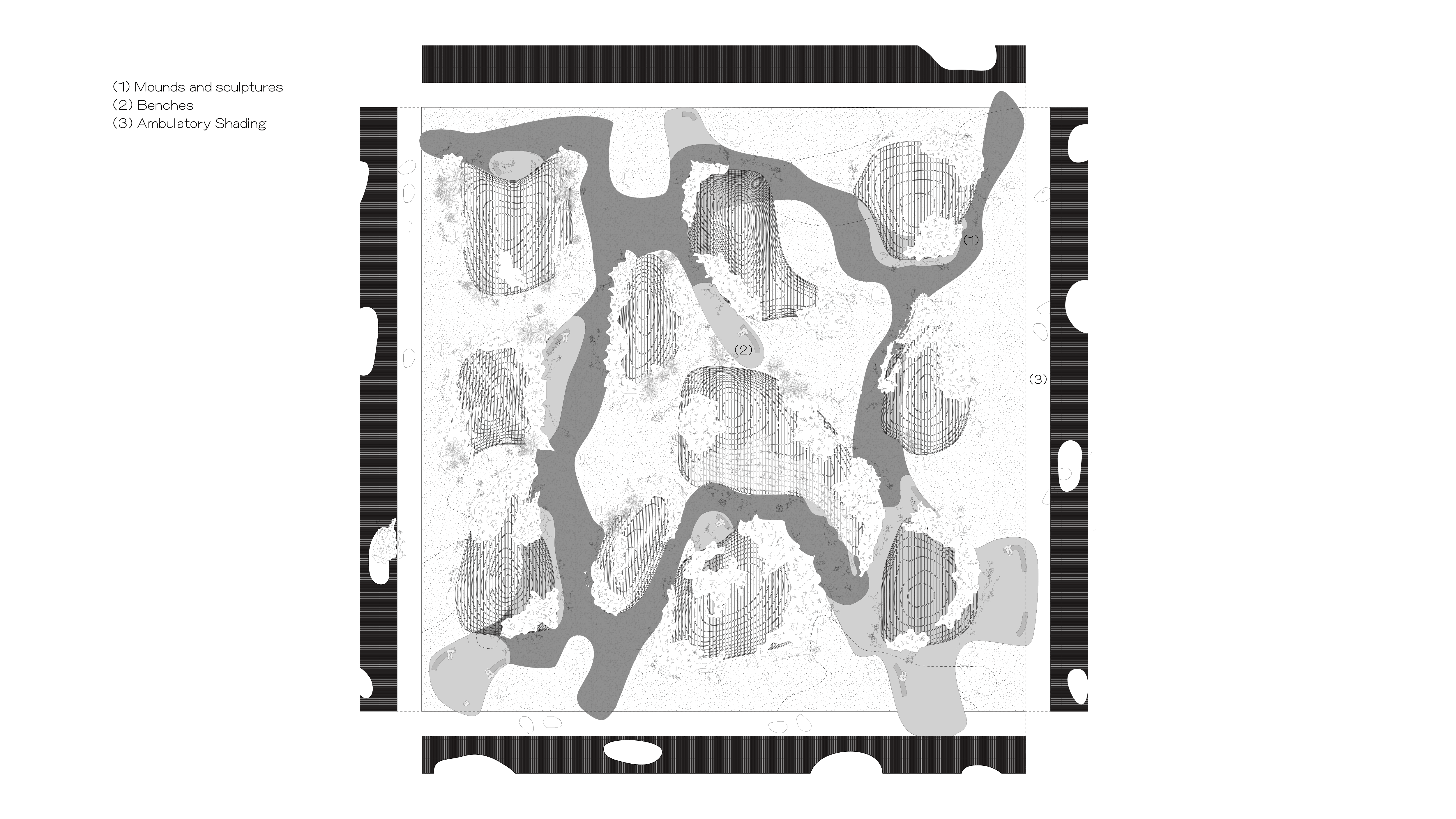 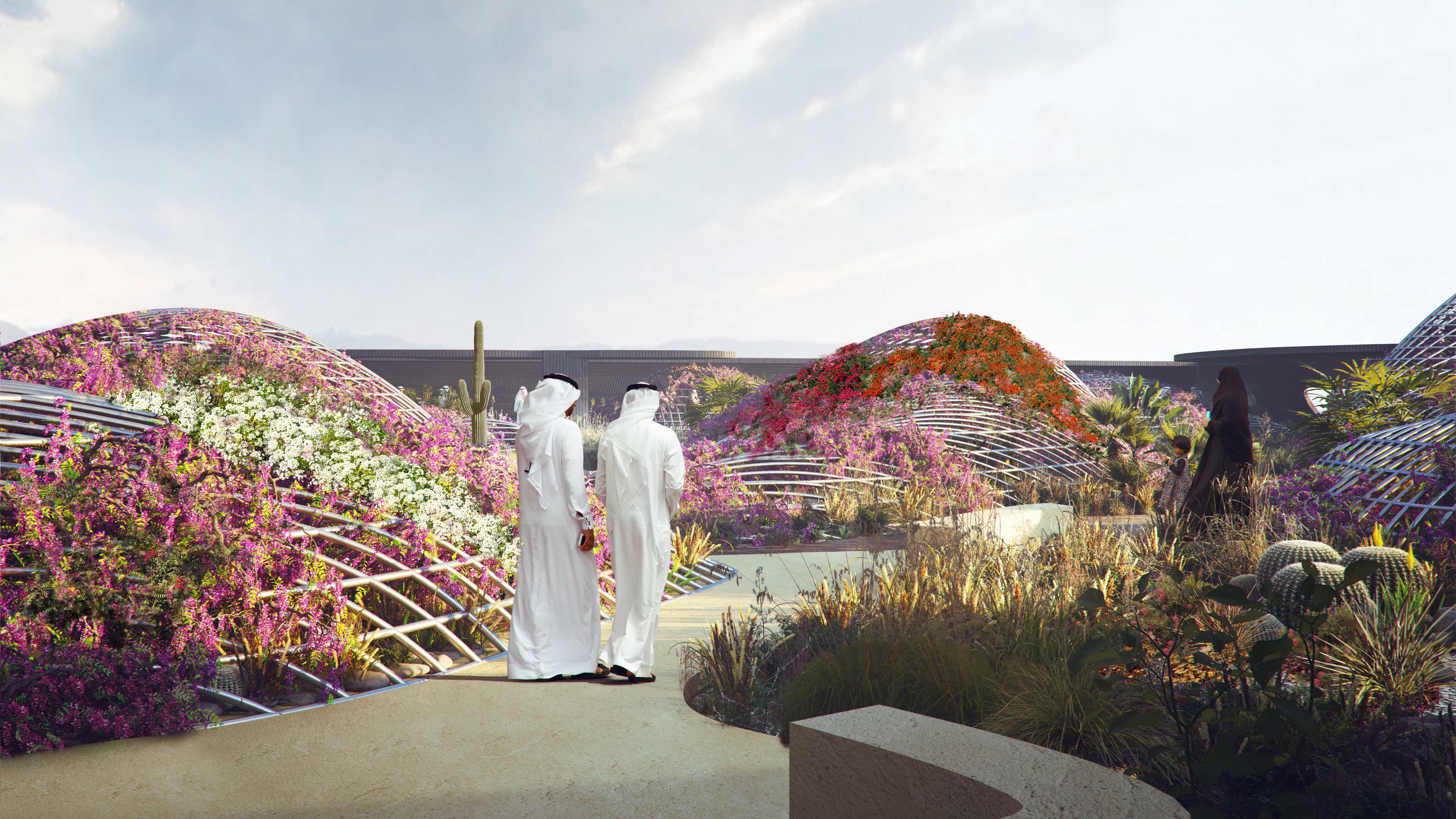 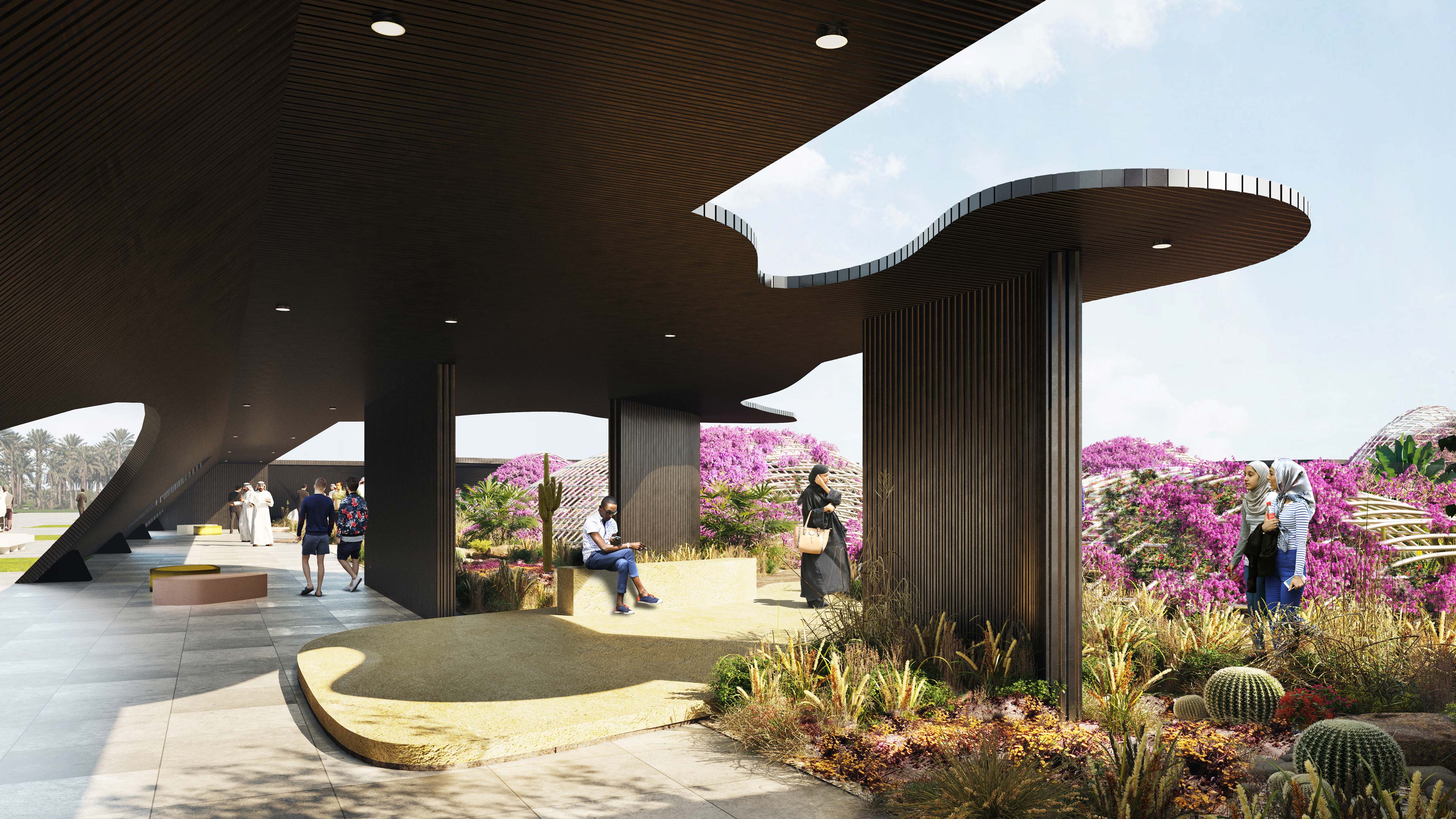 As part of the Sharjah Architecture Triennial’s Propositions section, a number of practices were invited to submit proposals for architectural interventions in the emirate. Building off a documentation of mounds along the Gulf coast, the proposal for a park in Sharjah explores the idea of a garden as a site for an idealized topographic intervention. Sited within the historic Al Mareija neighborhood in Sharjah, the proposition imagines a walled garden containing a bougainvillea topography and interspersed desert plant life.

An armature of mounds act as a scaffolding for bougainvillea to climb onto eventually creating a series of shaded rooms to inhabit. An ambulatory walkway underneath a corrugated aluminum shading structure defines the perimeter of the walled garden. Within its walls, podiums and benches growing from the pathways allow for moments of respite and contemplation. As an exploration of a temporary public garden, the use of corrugated aluminum and bougainvillea allows for a public park that grows over the course of the installation - transforming from sculptural armature to verdant topography within two to three years’ time. Bougainvillea are typically associated with house gardens in the region, and residential compounds use the climbing plant as a decorative feature, introducing color and life to the often barren enclosed spaces of the Gulf private realm. Using them as topographic elements in a bounded garden allows the public park to exist in a realm between the domestic and the communal, where the planting is domestic and reminiscent of a home garden but the creation of an artificial topography ties it to the communal project of earth making and marking in the Arabian peninsula. 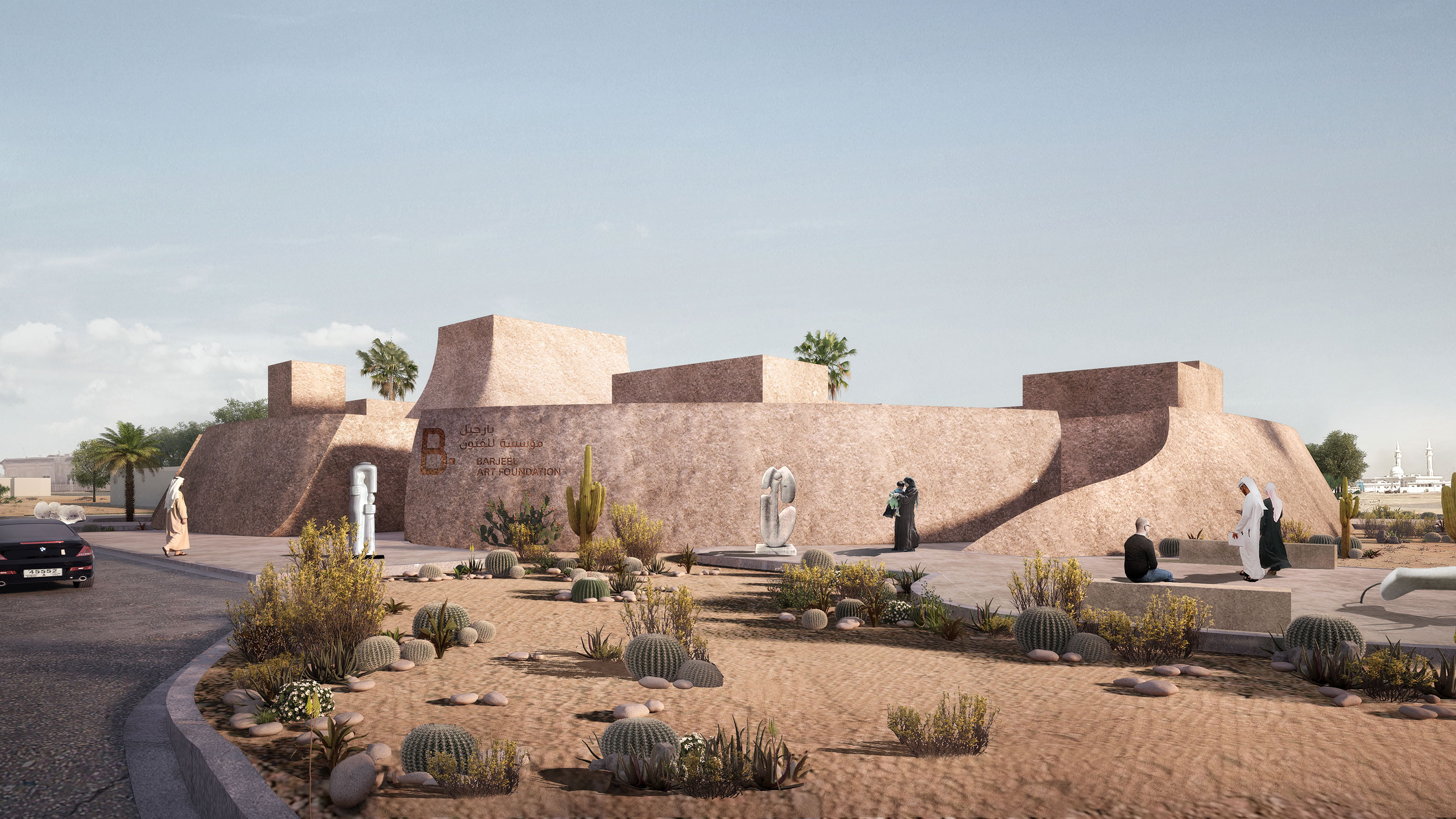 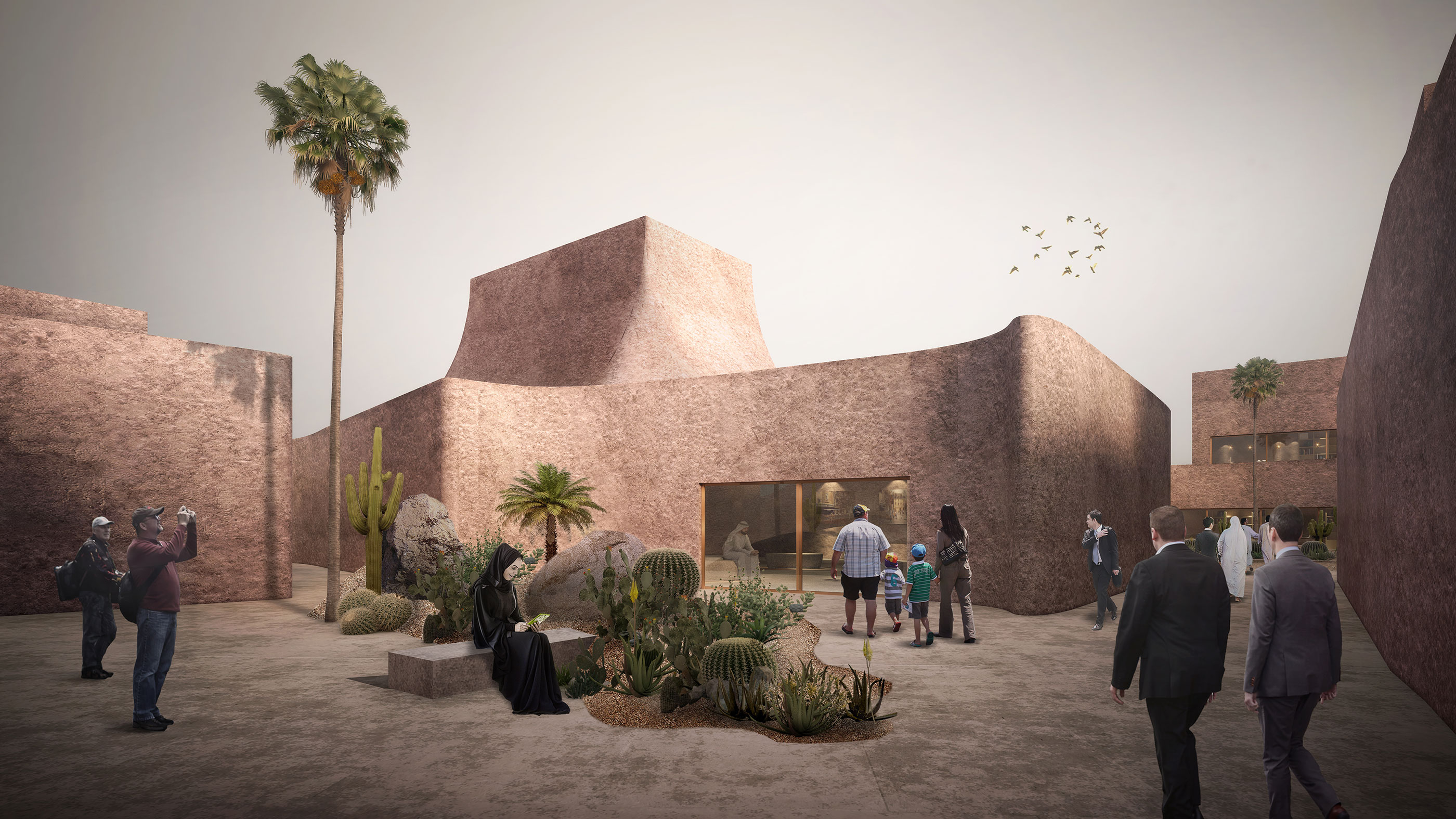 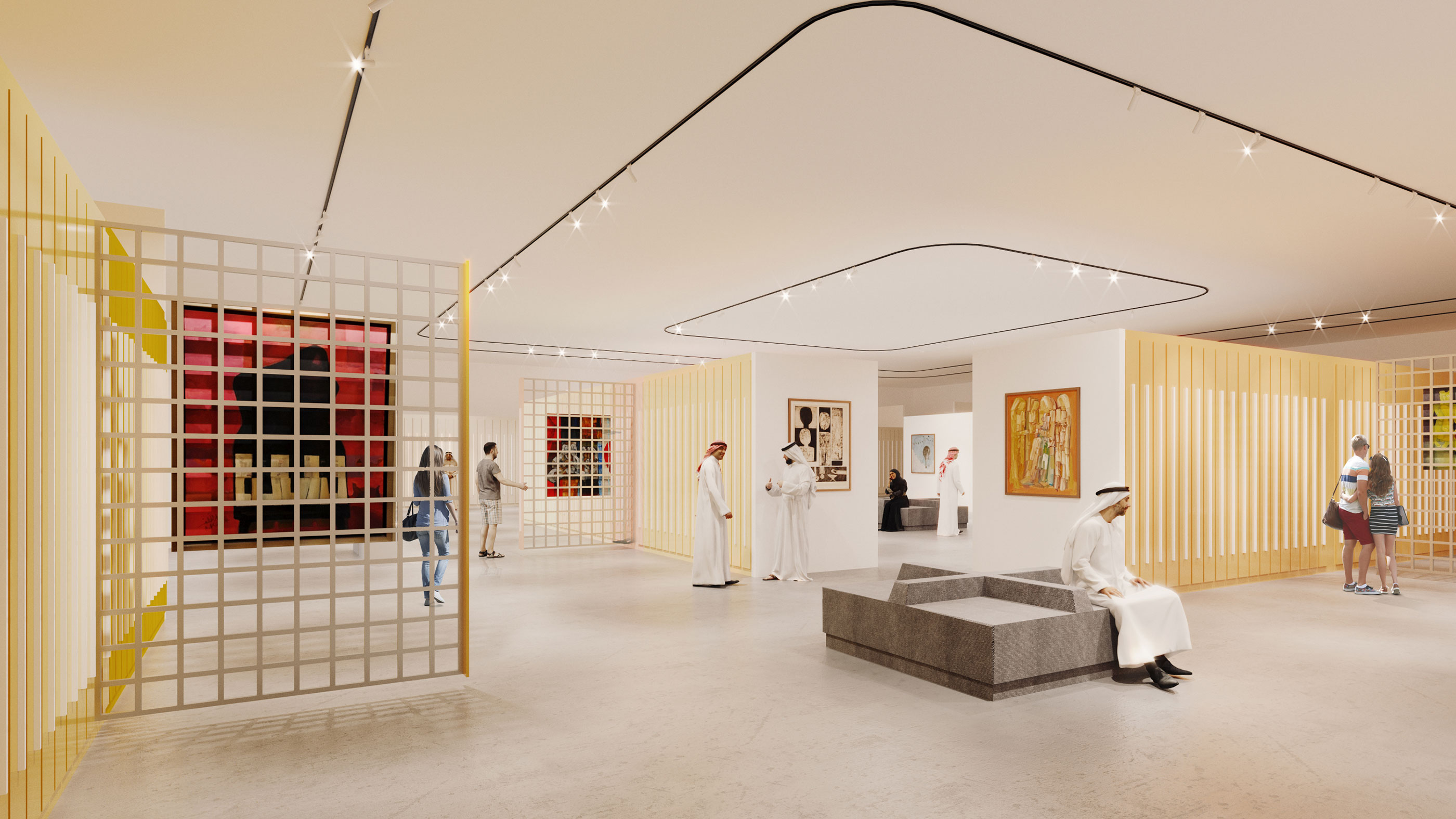 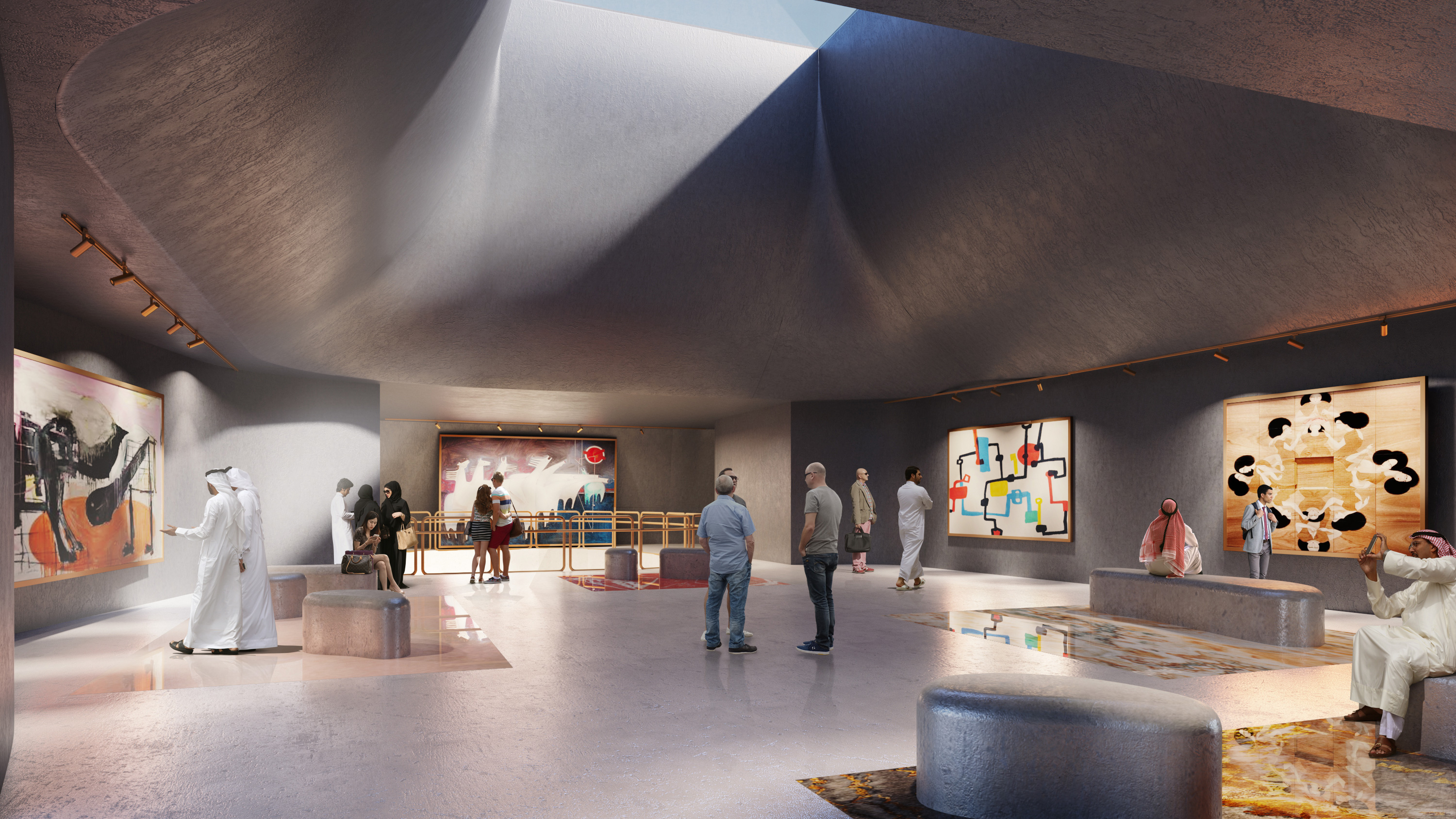 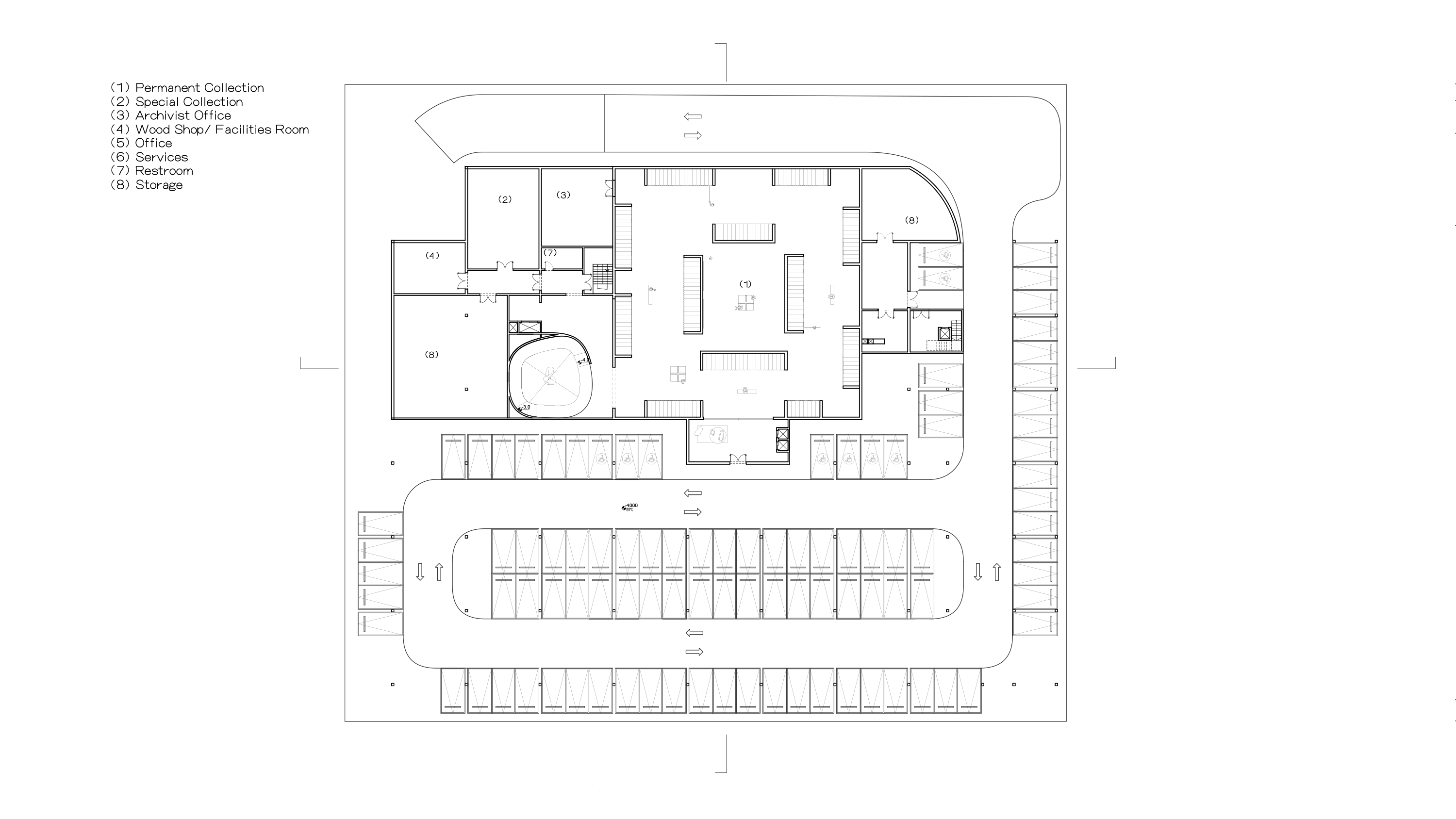 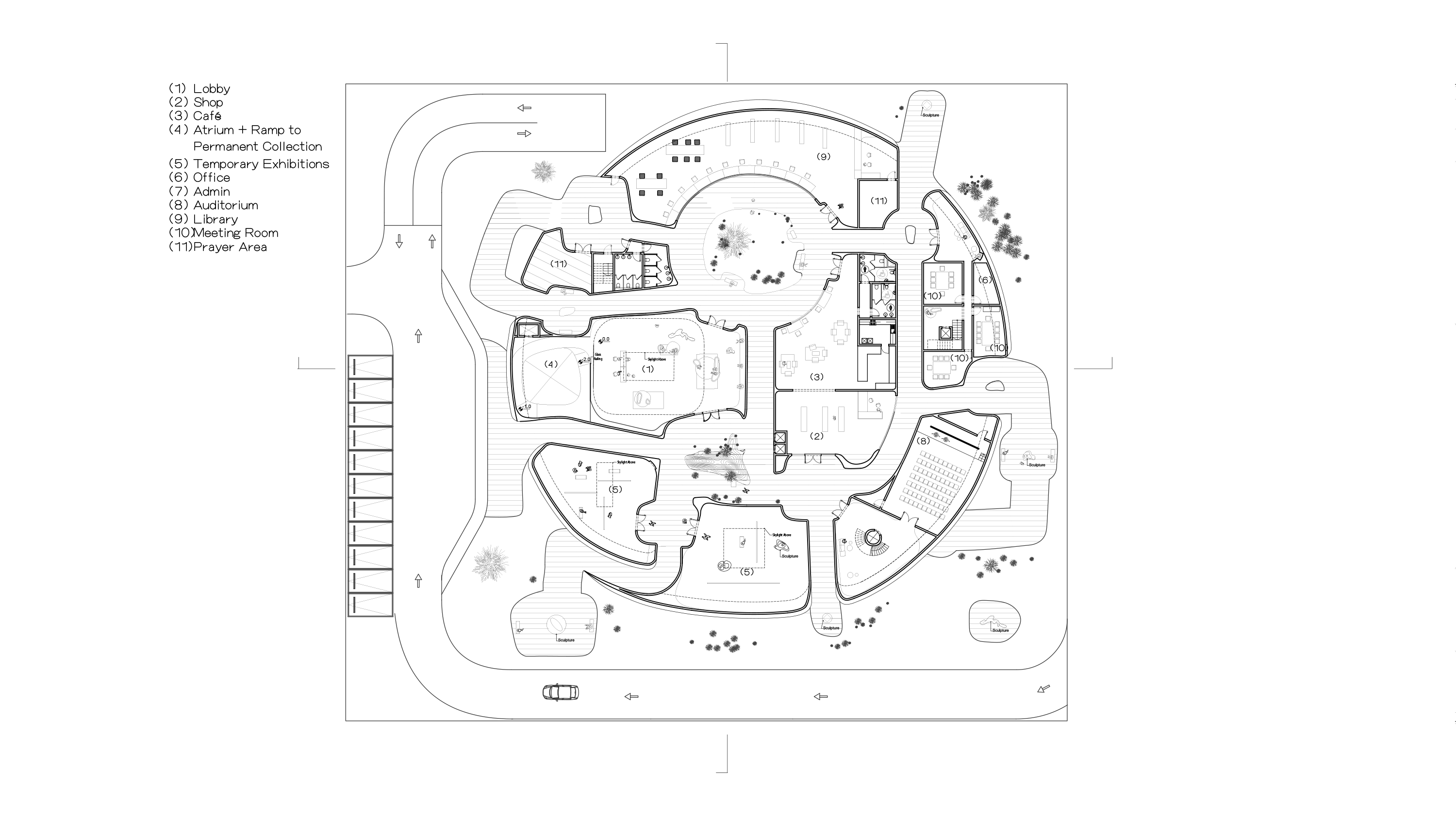 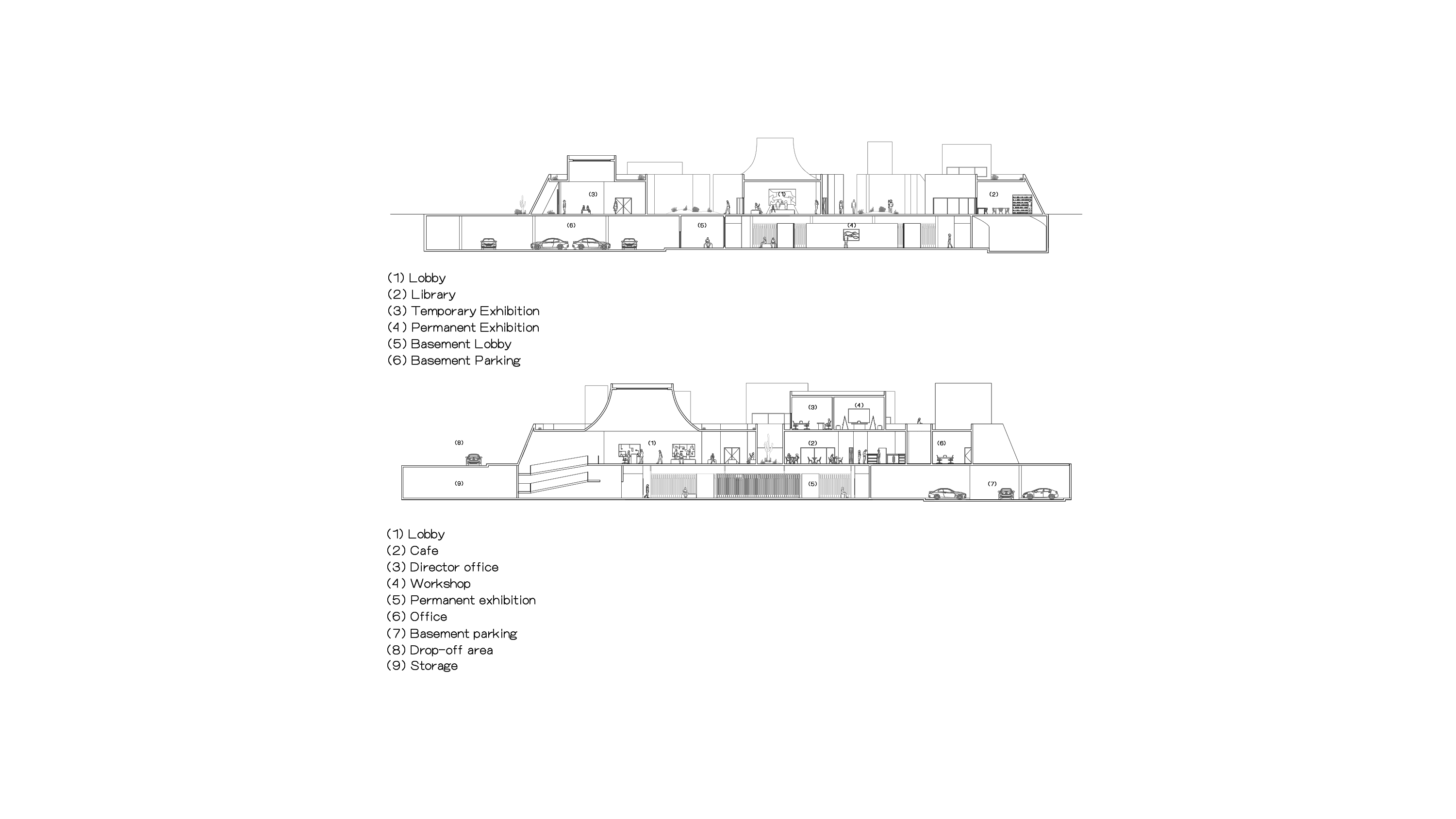 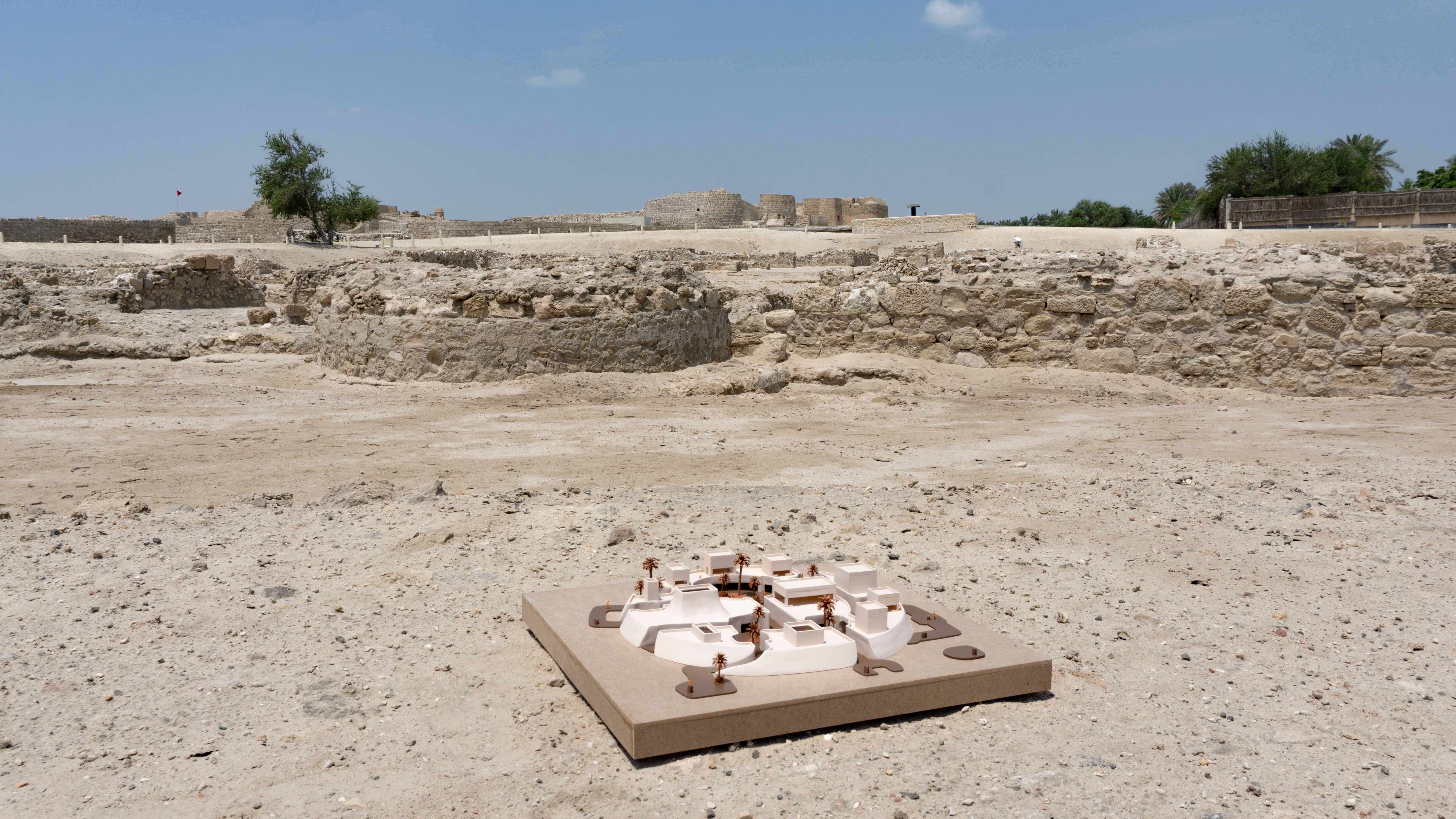 The proposal is for a museum that has equal parts indoor and outdoor experience of Modern Arab art. The building is a series of pathways, alleys and gardens which are cut from a bounding circle made of tan hammered concrete. In reference to both the traditional streets and forts of the Emirates as well as to contemporary institutions like the Sharjah Art Foundation, the Museum provides the unique opportunity to dissolve the space of the singular museum building and to create a series of rooms, courtyards and gardens each with a distinct public and cultural function.

The lobby building is marked by the tall sloped skylight; it serves as the main point of entry and provides access to the permanent collection. The ground level also contains a library, lecture hall, temporary exhibition spaces, gift shop and cafe. The administrative functions and additional workshop spaces are on the first floor, connected by a meandering path, which turns the administration into a small town of its own with scenery and views to the courtyard.

We have organized the permanent collection as part-exhibition part-archive. The shelves are ordered around the wall by country and date and the space has both a flat storage structure as well as several niches and exhibition walls for curated displays. The archive acts as a place for discovering the art and encouraging visitors to curate their own tour, viewing works and pulling out the 3 meter tall walls. The permanent collection offers a more speculative experience of the art through the archive while maintaining enough wall-space to ensure a curated selection of modern Arab art is always on display. 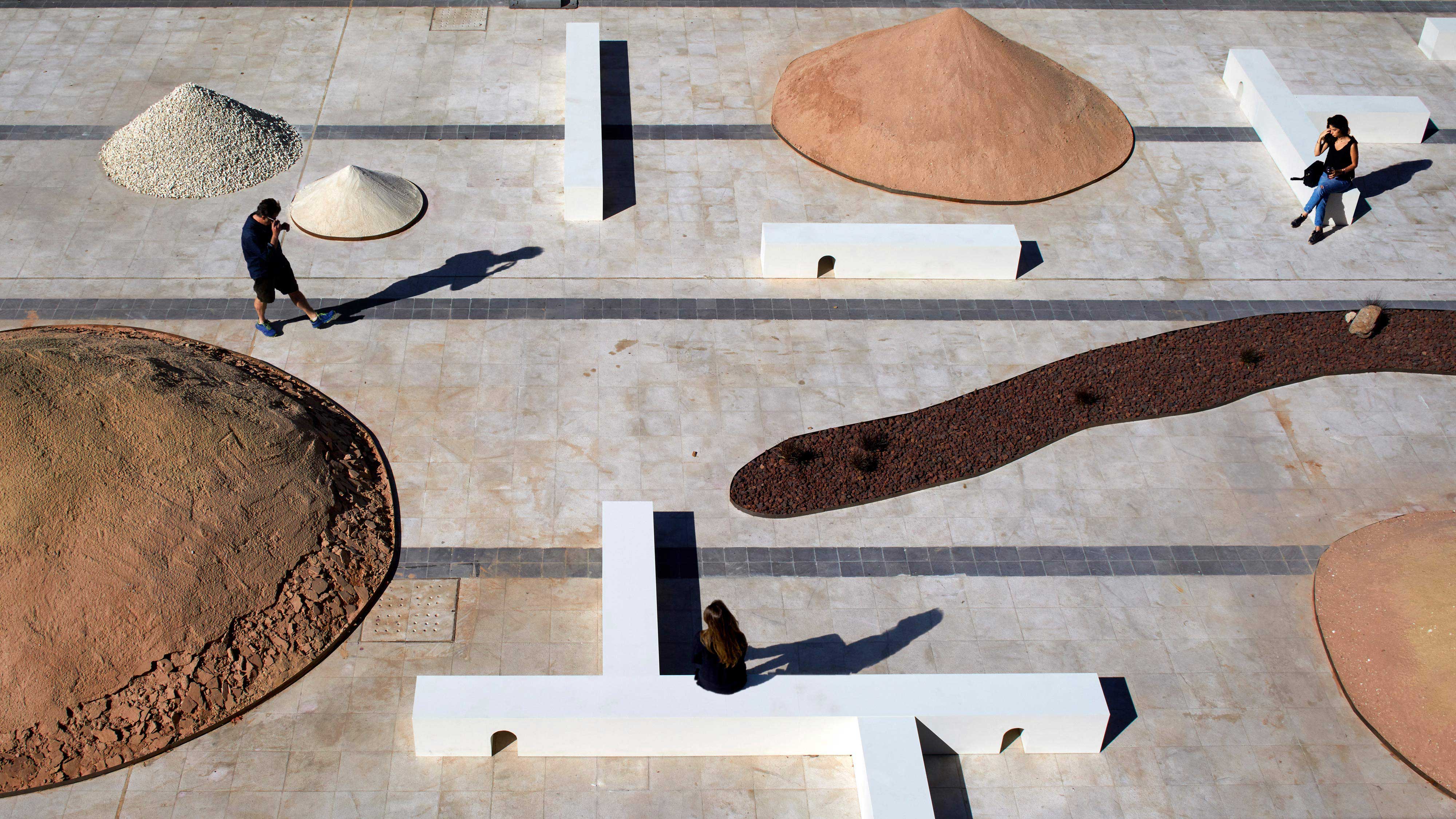 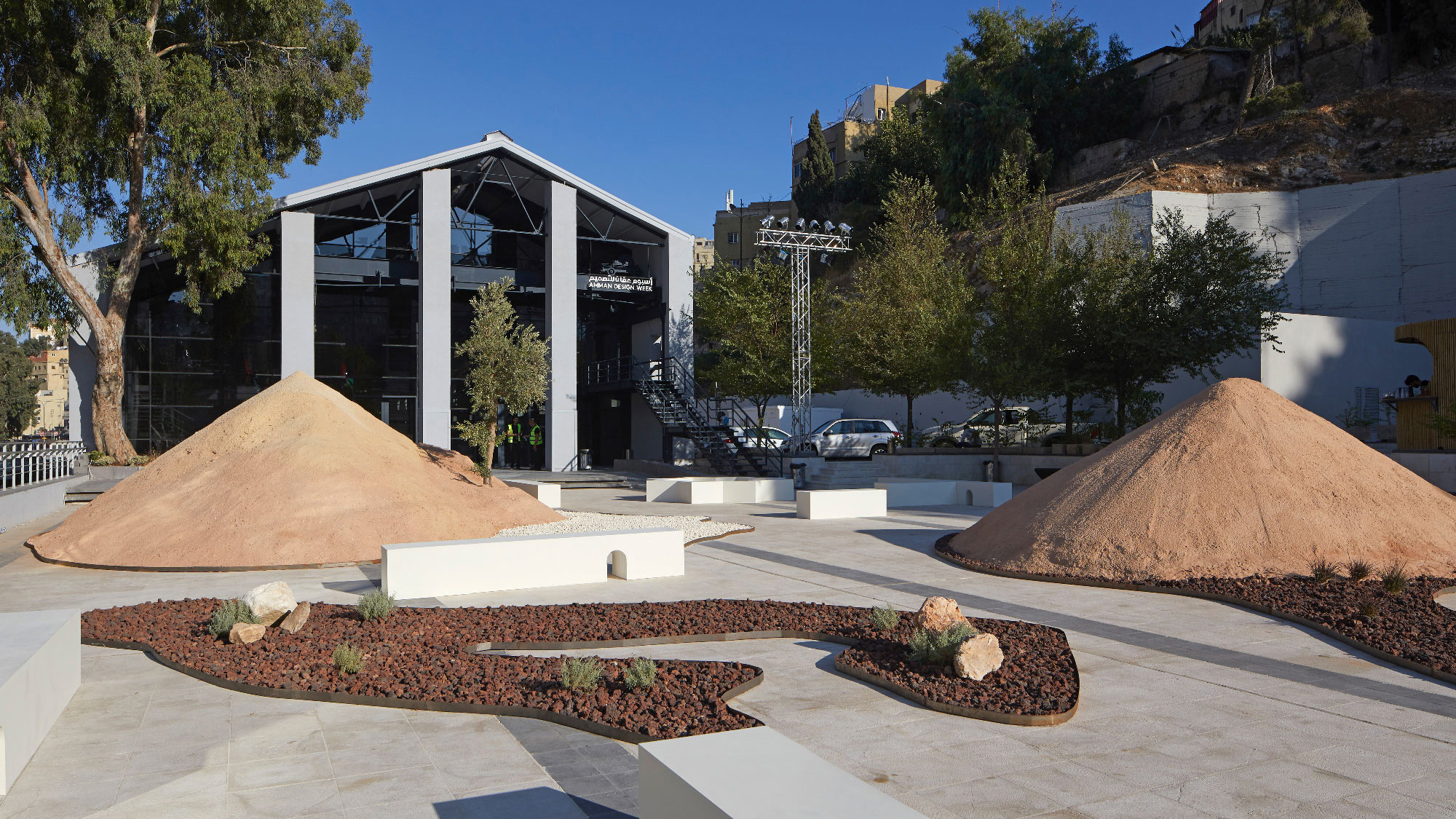 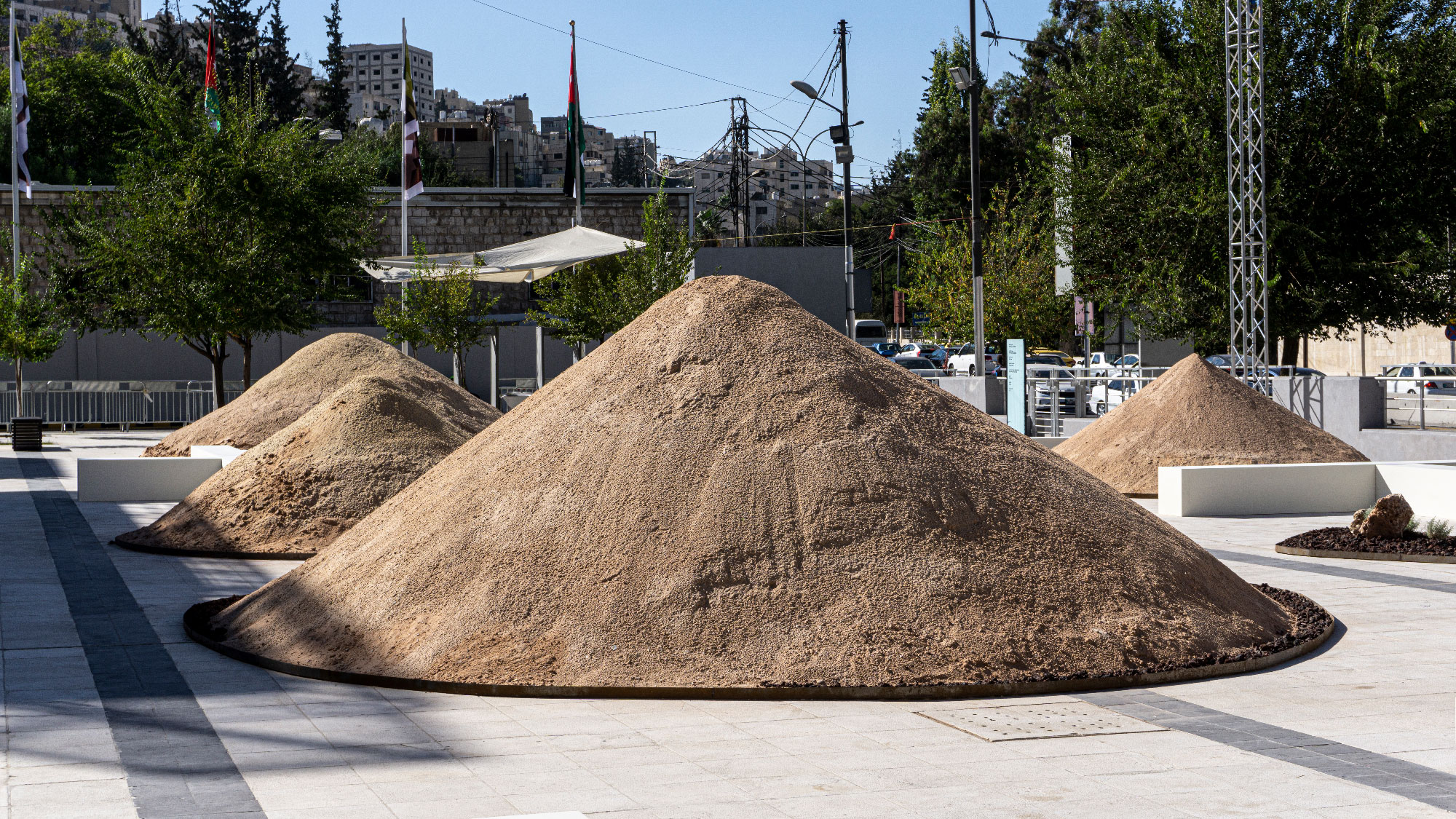 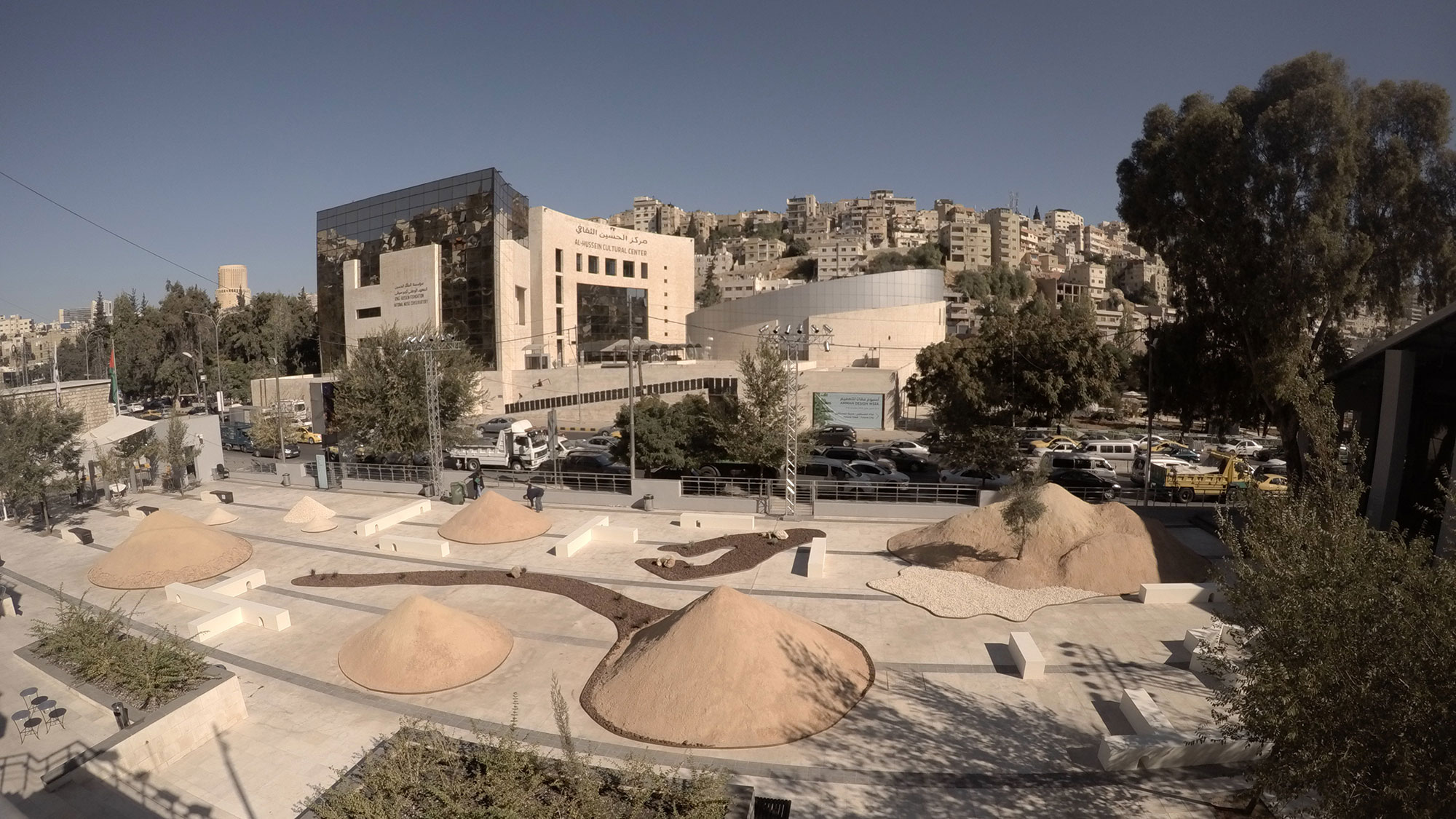 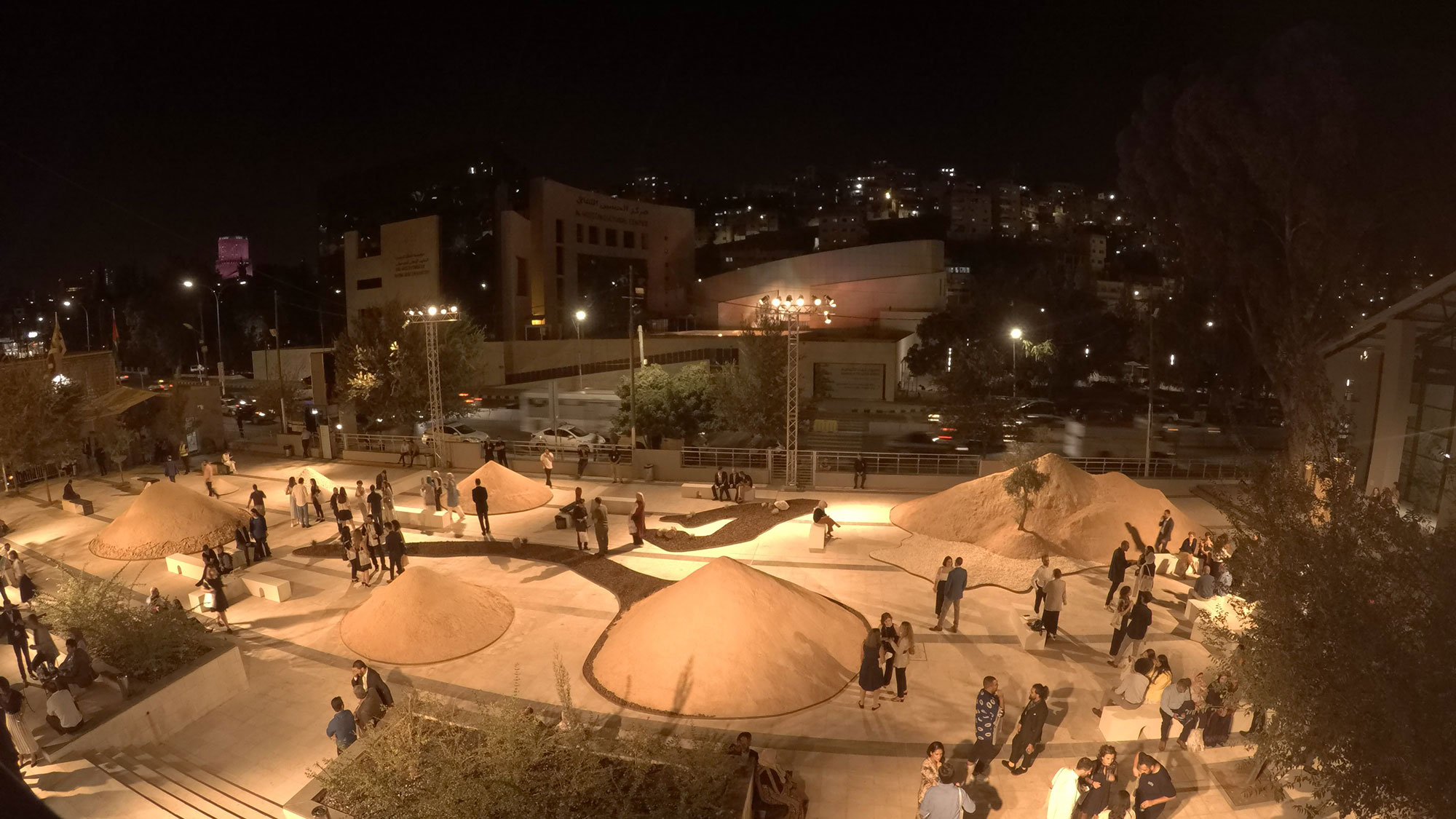 The Arabic-speaking countries of the eastern Mediterranean refer to a garden as jnaina or ‘little paradise’. This diminutive form of jana in Semitic languages is used interchangeability for both garden and for heaven. The jnaina, a delicate curation of plants in an ordered composition, is a fulfillment of heaven in miniature. It is an ordered personal realm, a small piece of a larger ecological aspiration to see a world as a continuous field of organized life.

This vision of heaven on earth is appropriate in an arid context, as it makes heaven a place without scarcity or precarity. With the advent of the modern state many of these aspirations aligned with a colonial vision for a verdant Middle East. Much of the Arabian landscape in the Levant and the Gulf is an inherited fantasy: the well mowed lawn, the verdant setback – notions of care and fecundity that are only made possible by the availability of desalinated and treated water. In Jordan the questions of landscape and developmental aspiration are interlinked, they both ask how paradise can be re-imagined in one of the world’s most water scarce countries. It is in this context that for Amman Design Week, Civil Architecture and studiolibani present a prototype for a waterless public garden: a provocation set against both the Arab ideal of the garden as heaven and against colonial notions of modern landscape. The installation, titled: ‘Minor Paradises’, asks how the public garden can be used as a way to rethink scarcity and ultimately, paradise. 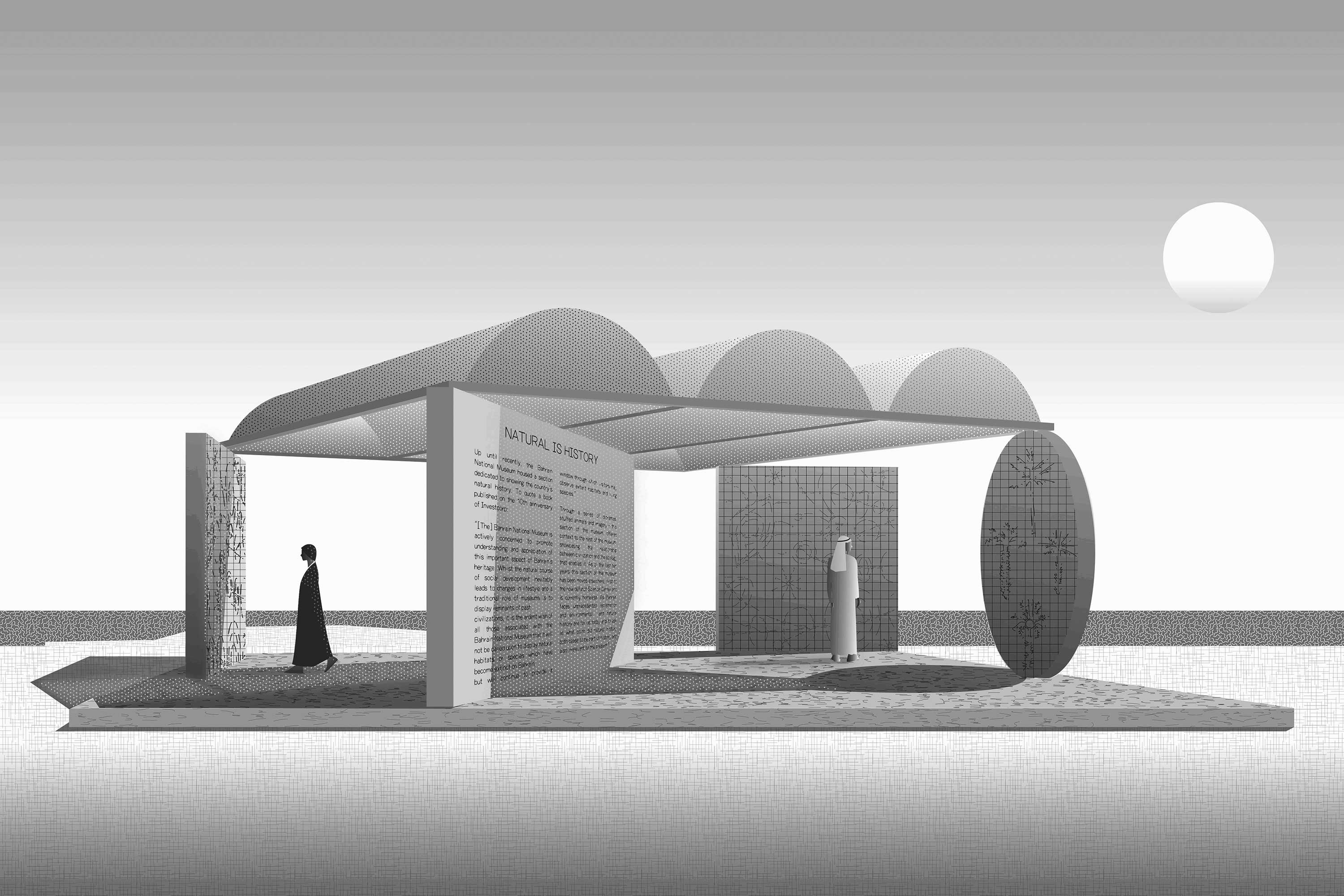 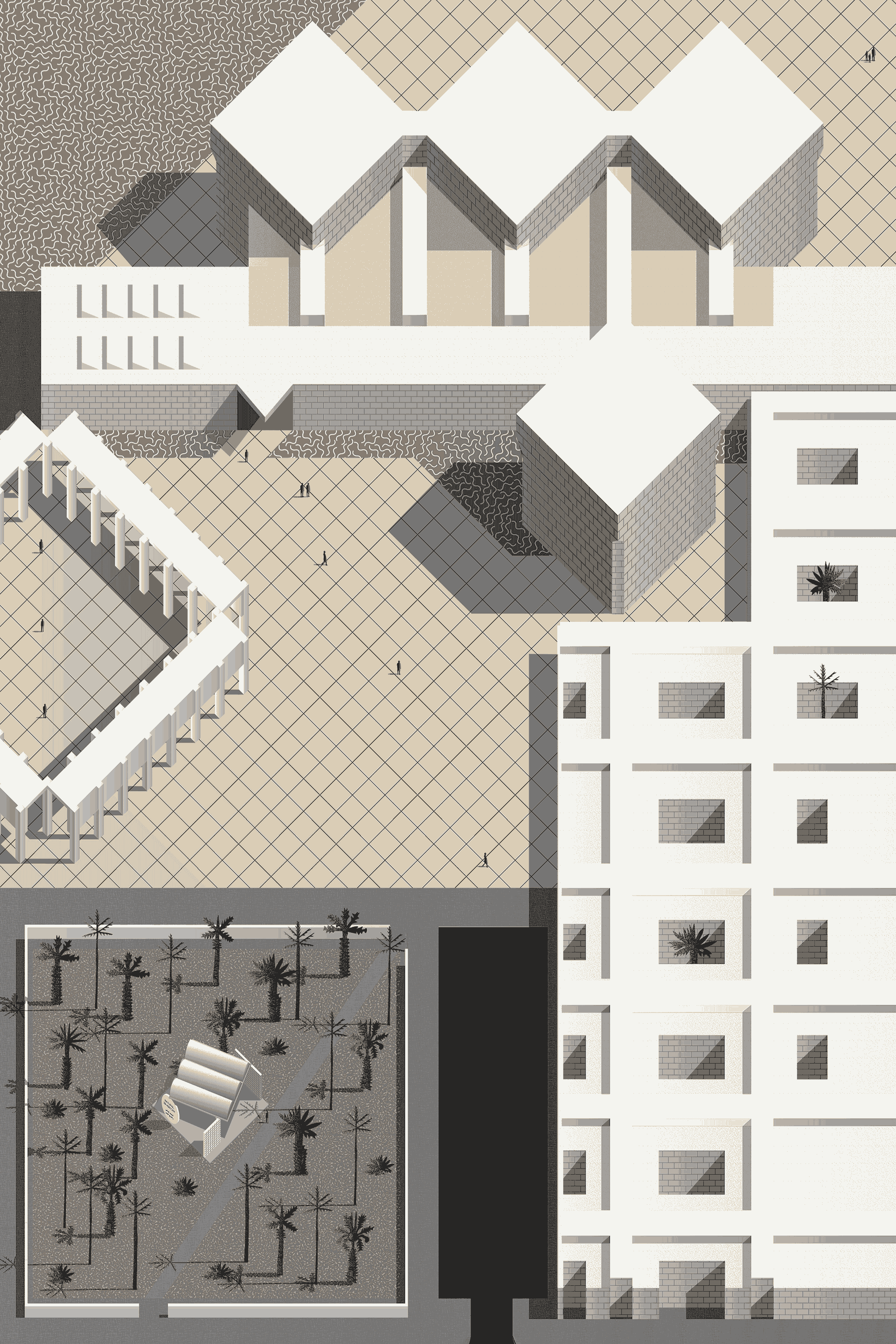 Up until recently, the Bahrain National Museum housed a section dedicated to showing the country’s natural history. Through a series of dioramas, stuffed animals and imagery–this section of the museum offered context to the rest of the museum, showcasing the relationship between civilization and the ecology that enables it.

As of the last ten years this section of the museum has been moved elsewhere, first to the now defunct Science Center and is currently missing.

As Bahrain faces unprecedented environmental degradation we must ask what the role of both museum and natural history are for us today and at what point did nature both cease to be part of history and the present?

Our proposal for an installation as part of the National Museum’s 30th anniversary is to temporarily house the natural history portion of the museum, allowing visitors to to experience and learn about the flora, fauna and ecology of Bahrain. By creating this little pavilion, an architectural reminder of the National Museum (with vaults and implied rotated cube), oriented both to the sea and to the national museum we ask what our relationship to the natural is and how it has changed over the course of the past century.